The traveling party was, basically, three teenage boys and their grandmothers.

We went on a bus tour around the south of England. It started in London, then went around to various touristy spots, then circled back to London. All in all the tour lasted around two weeks, and it was a lot of fun.

We went to Stonehenge on the tour. I remember thinking that it looked a lot bigger on TV.

There were New Age hippies there, like meditating in a circle or something. Which I guess was cool.

The other people on the tour were mostly other Americans. One older fellow, probably 80, maybe, approached me and asked if I knew how they got those big stones on top of the other ones.

“Helicopters,” the old man said. His name was Blake.

I stood there kinda dumbfounded for a second before realizing that Blake was cracking a joke.

“I’ll be danged,” I may have said. “I never thought about that possibility.” I may not have said that at all, but at any rate I laughed and went along with the joke.

A few minutes later, I watched as Blake tried the joke on my cousin D____, the grandson of my grandma’s cousin. That makes D____ my third cousin? I honestly don’t know.

D____ didn’t quite get the joke, I don’t think. His reaction was different than mine, at any rate. He replied in more of a “humoring the old person” sort of way, as opposed to a “ha ha, that’s funny” sort of way.

“And if you’re ever in the Rocky Mountains,” Blake continued, “fall off.” 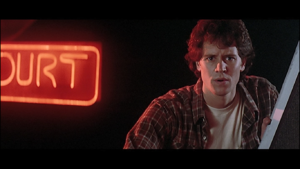 Do you recognize that fellow? That’s Alex Rogan, the hero of the 1980s sci-fi/adventure film “The Last Starfighter,” a film I am a pretty big fan of, mostly for sentimental-type reasons.

Actually, that might be Beta, the android sent to replace Alex while Alex was off in space, fighting the Ko-Dan Armada. Beta looks just like Alex, and his purpose was to cover up the fact that Alex was gone, so his family wouldn’t miss him.

It’s Lance Guest, I know that much.

If I hadn’t told you what film that screenshot was from, would you have known? I’m sure some of you would have… but honestly if I hadn’t been the person who took the screenshot, I’m not sure I would know, despite having watched “The Last Starfighter” about a hundred times growing up, and even after watching it again recently.

Now, if somebody had shown me a picture of a Gunstar, the type of spaceship Alex ends up flying around in, or of Grig, the lizard-y alien guy who pilots Alex’s Gunstar, or even a picture of Alex in his Starfighter uniform, I would probably have recognized it instantly.

But just going on that shot up there, no, I’m not sure I would recognize it.

Why must I spell it out for you?
All of the images you see
Are just a tiny part of me.
The images I see of you
Are just a fraction of what’s true.

I remember sitting with you under an umbrella. It was drizzling rain. We were sitting on the curb in front of that one convenience store on the opposite side of the block from Lotteria. We were drunk, as we often were.

You died nearly a decade ago.

I don’t remember the last novel I read. Which novel it was, I mean. I’ve started a couple in the past several months, but I haven’t had the attention span to finish them.

A frat brother suggested I go to “Crazy Eric” to get a haircut. “Crazy Eric” was the barber at the aforementioned barber shop. Crazy Eric talked everyone’s ear off, I was told, and he had some pretty interesting ideas about the government, conspiracies, and things like that.

So I went. Crazy Eric’s barber shop doubled as sort of an antique shop, I think. There were all sorts of old antique-y things in there. Crazy Eric’s wife also worked there.

I got my hair cut by Crazy Eric several times. I tried to get him started on conspiracy theories the first couple of times, but he never really bit. He actually didn’t talk much at all while cutting my hair, which was kind of a disappointment.