You know, I got to thinking, and I made a real breakthrough: wiping my ass is something I do primarily for other people’s benefit. And lately, it’s really been cramping my style.

I want to be free, dammit.

I don’t want to be constrained by your made-up “rules.”

Me, I’m gonna make my own rules.

No more ass-wiping for this American. No sirree.

It’s boring, and I don’t like it. And I only do it so my ass won’t stink, and it’s my ass, so I don’t really smell it anyway.

If you own a business, and you go around doing what the government tells you to do, making people leave who smell like shit because they can’t be bothered to do something as simple as wiping their own ass, well, you’re a COMMUNIST.

Think about it: if somebody never came along and TOLD you to wipe your ass, you’d have never started doing it.

Do you do what EVERYONE tells you to do, all the time?

And you call yourself an American? HA.

All you are is a robot, marching along in line with all the other robots, DOING WHAT *THEY* TOLD YOU TO DO.

What’s that? You say “doctors” and “scientists” say people should wipe their asses?

Don’t you know those same doctors and scientists want to CONTROL YOUR THOUGHTS?

Give em an inch, they take a mile. I mean, they SAY that wiping your ass helps you stay healthy, but think about this:

Every person you know who died, ever…

Every one of those dead people WIPED THEIR ASSES when they were alive!

Did you ever think about that? Of course you didn’t! You’ve been brainwashed, just like all the other sheep.

But it’s not too late. You’ve seen the truth, now you’ve got to decide…

Don’t give in to their control! Join me in the anti-wiping movement.

And when you walk into a room, and everybody smells your ass, and they’re like “oh my God what’s that smell?” you tell em it’s the smell of freedom.

And remember, that smell only smells bad to them because they’ve been BRAINWASHED.

I dunno why, but the song “Bleeding Love” popped into my head yesterday, so I found the chords on the internet and figured out the vocal melody.

And I thought it would be cool if I played it while video-ing my TV as I was watching Season 8, Episode 2 of “The X-Files,” an episode I had never seen before.

And the part of the vocal melody that corresponds to “you cut me open and I/keep bleeding, I keep keep bleeding love” ended up coming at just the right time.

I didn’t plan it that way, it just came out that way.

Alright, so I’ve been watching/re-watching “The X-Files” on Hulu off and on for the past few months.

“Watching/re-watching” because I think I had seen roughly half of the episodes already… maybe more like a third of them.

In case you don’t know, “The X-Files” consists of basically 2 types of episodes. One type of episode is “Monster Of The Week”. In these episodes, Mulder and Scully investigate some weird creature, or ghost, or alien, or whatever, and the story is resolved (more or less) in that self-contained episode. “Self-contained” because in the next episode, they would be going after some other monster, and the previous episode’s monster (or whatever) wouldn’t be mentioned.

Some of the more memorable “monsters of the week” came back from time to time, but most of them were one-offs.

That’s one type of X-Files episode. The other type are called “mytharc” episodes.

“Mytharc” is a term the show’s staff actually used (if Google is to be believed, “TRUST NO ONE” 🙂 ), and the word is a combination of “mythology” and “story arc.”

Which means, these episodes aren’t self-contained, they’re one long story. The X-Files mytharc was about the government covering up alien abductions, Mulder and Scully’s backstories, and so on.

As an aside, several years ago I got bored and decided to watch all the mytharc episodes up to I think season 5… because that’s all the seasons the local video rental place (since closed) had to rent.

I remember reading back then that many hardcore X-Files fans preferred “monster of the week” episodes. Regarding that, I can say with 100% certainty that if you only watch the mytharc episodes, you miss out on a lot (and I do mean a LOT) of what makes the X-Files a great show.

Actually my personal favorite X-Files episode – “Jose Chung’s From Outer Space”; the episode where Jesse Ventura and Alex Trebek make appearances as Men In Black – isn’t considered a mytharc episode, at least it wasn’t the last time I checked.

I am digressing like hell here, but if you’ve tried to get into The X-Files and couldn’t, watch that episode. Season 3, episode 20… it is (in my opinion) the quintessential X-Files episode. I didn’t really get the humor in the series until I saw that episode, and anyways it’s a good episode. 🙂

But getting back to the point, there are recurring characters in mytharc episodes, and one of them is the strong-jawed fellow you see in the picture.

Well, it’s the same actor at least… there are several of these guys in the show. They are shape-shifting alien bounty hunters (the picture below is what they look like by default, I guess), and the only way to kill them is to stab (or shoot) them in the back of the neck. The dagger thing in the second pic is their weapon of choice, and they use it to kill various aliens disguised as humans, as well as probably a few humans, I honestly don’t remember. But anyways, when you stab (or shoot) one of these guys in the back of the neck, green stuff starts bubbling out, and they melt into a pile of green goop, basically. 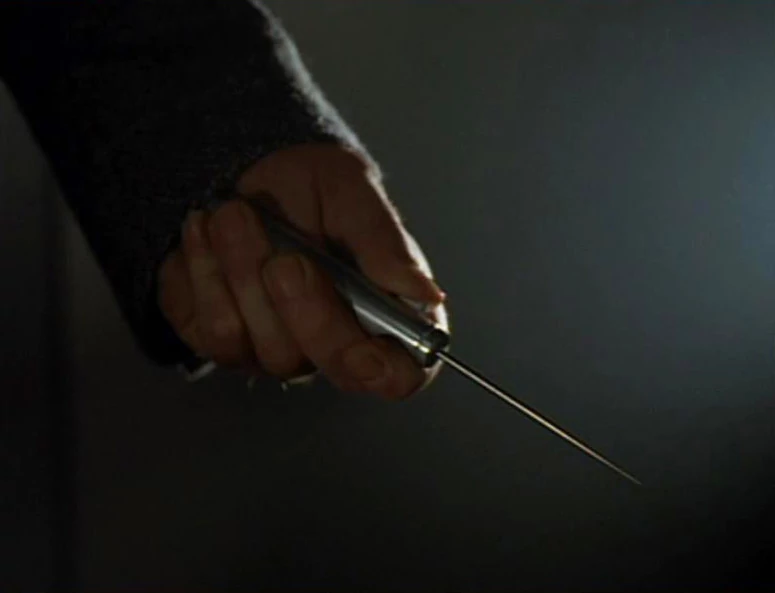 Early in the series, when these guys (or other aliens like them) get killed, the green goop is accompanied by a toxic gas that kills humans.
But later…

I am currently watching Season 8 for the first time. And in episode 2, Scully kills one of these guys by shooting him in the back of the neck. In the scene, she is down on the floor after a struggle, and she fires a single shot that pierces his neck, he falls to the floor a few feet away from her, and he turns into a pile of green goop, as expected.

But… there’s no poison gas. And my question to any other X-Files fans who may be on my friends list is… where’s the poison gas?

I have looked online for an explanation of this, but all I can find regarding season 8 are general reviews that talk about how bad it is. “Doggett and pony show” and whatnot. But nobody explained why Scully didn’t even bother to hold her breath when the toxic green goop started bubbling out of the alien’s neck when she shot him.

Maybe I missed something in an earlier episode that explained that (I did fall asleep watching some episodes, and sometimes I was half-watching, half-doing other stuff)… or maybe it was just lazy screenwriting.

Got a song I am working on, don’t know the chords or melody yet, not sure about the title, or where the hook is, or if it’s got one, or any of that stuff, in fact maybe it’s one of those talk-singing songs, where there’s like a story being told, then there’s a chorus, doesn’t have to be 20 minutes long, no 5-part harmonies, no audience sing-alongs with feelin, nothing like that, just a quick little anecdote about this one fella sitting there minding his own business, when this other fella walks up rubbing the side of his head. Now being a congenial sort, first fella asks him, “what are you rubbing your head for?” and the other fella replies “nother fella hit me in the head with his shovel” and the first fella asks him, “well what did he do a thing like that for?” and the other fella said “he didn’t like what I said to him” and so the first fella, being a curious sort, he asks the other fella “well what did you say to him?” and the other fella said “told him he was digging his own grave.”

and there ain’t no moral or anything to the song, except that maybe what looks like a good thing to one person might not look the same way to somebody else, and maybe every great once in a while you might find yourself looking at something that you think is good and fine, and maybe somebody else comes along and tells you they don’t like it.

And maybe they’ve got a pretty dang good reason to not like it.

Maybe people have been not liking that thing for a while now. For decades now.

And every time they said why they felt that way about it, you just tuned em out.

But tuned out they got, and mad was something else they got

When I peeked down into the hole you were diggin