Can’t say that I’m happy about that.

But hey, it is what it is, and I can’t just make like a tree and quit the internet just because I’m honestly scared shitless for the future of the United States and civilization as we know it.

I gotta keep on keepin’ on.

So that’s what I’m doing. And this blog is not and was never intended to be solely a political or news-related blog, it’s a blog featuring the various and sundry things that rattle around in my brain long enough to warrant my typing them out and sharing them with all of you awesome folks out there in internet land.

And somewhat serendipitously — the serendipitousness of which I speak will be revealed near the end of this post — I happened to purchase a Twin Peaks Definitive Gold Box Edition DVD set off of eBay in the weeks leading up to when the guy that tried to rape Marty McFly’s mom on multiple occasions got elected president of the country with the largest nuclear arsenal on the planet.

I didn’t pay full price for my Twin Peaks DVD set, at least not the price Walmart is asking for it on the link provided. Mine was slightly used, but it’s in great condition, and I enjoyed watching the pilot (including the alternate international ending) and both seasons immensely, and I will probably watch them all again at some point.

Yes, Twin Peaks really is that good of a show.

I also purchased a copy of the feature film/prequel “Twin Peaks: Fire Walk With Me” on eBay — also used, also cheaper than retail — and watched it after I finished season 2 of Twin Peaks. And it’s interesting to watch, but I honestly think that the nudity and profanity featured in it took something intangible away from the Twin Peaks universe. A big part of what’s so addictive about Twin Peaks is that the viewer is made aware that there’s something less than wholesome going on under the lily-white surface of the small logging town of Twin Peaks, but what those less-than-wholesome goings-on actually are is never completely revealed in explicit terms in the TV series itself.

And hey, don’t get me twisted here: I’m no prude. To people who only know me through my blog or through social media, I may come across that way sometimes, but to anyone who knows me personally, well, you can ask them yourself. I prefer to leave that aspect of myself to the real world, and while that dynamic does sort of mirror the dynamic of Twin Peaks — the whole “dark underbelly vs. prim and proper facade” thing, I mean — I prefer to maintain that dynamic rather than carelessly blend the two together.

In a roundabout way, what I am saying is that if Showtime’s Twin Peaks Season 3 features lots of boobies and four-letter words, it’s going to be fundamentally different than the first two seasons.

It’s not that I don’t like looking at boobies, or that I wince whenever someone says “fuck,” it’s just that “Fire Walk With Me” sacrificed something essential about Twin Peaks by including lots of boobies and cusswords.

If that doesn’t make sense to you, I don’t know how to explain it any better.

I don’t want this to be a completely political post, but a major plot element in Twin Peaks — incidentally, one that is only fully revealed in “Fire Walk With Me” — quite serendipitiously coincides with something rather disgusting about our new president-elect.

And yes, it’s more disgusting than when Biff Tannen got manure dumped in his convertible, and some of it got in his mouth.

But for me to explain this any further, I am going to have to spoil certain things for you, the reader. And if you haven’t seen the first two seasons of Twin Peaks or “Fire Walk With Me,” well, I don’t want to spoil anything for you. This spoiler is pretty major, and it affects the way the viewer empathizes with certain characters, and as Twin Peaks is by far more character-driven than plot-driven, well, the way the viewer feels about the show’s many characters as the show progresses is important.

So, before I get into that, I want to briefly discuss the visual aspect of Twin Peaks. Articles and even books have been written about this, and they reference all sorts of symbolism and mythology, and knowing that David Lynch obsesses over every little detail of every shot of every film he’s ever done — he didn’t direct every episode of Twin Peaks, by the way, but the obsessiveness is still there when other directors stepped in — all these articles and books are definitely worth checking out, if you’re a fan of the show.

I’m going to take a much more superficial approach and just talk about — and show you — how good-looking most of the actors in the show are. This is both to provide people who don’t want me to spoil a big part of Twin Peaks for them an opportunity to navigate away from this page before they accidentally read my spoiler and also to just have an excuse to post pictures of good-looking people to my blog.

Anyways, here we go with the “avoiding the spoiler/look at the pretty people” section of this post: 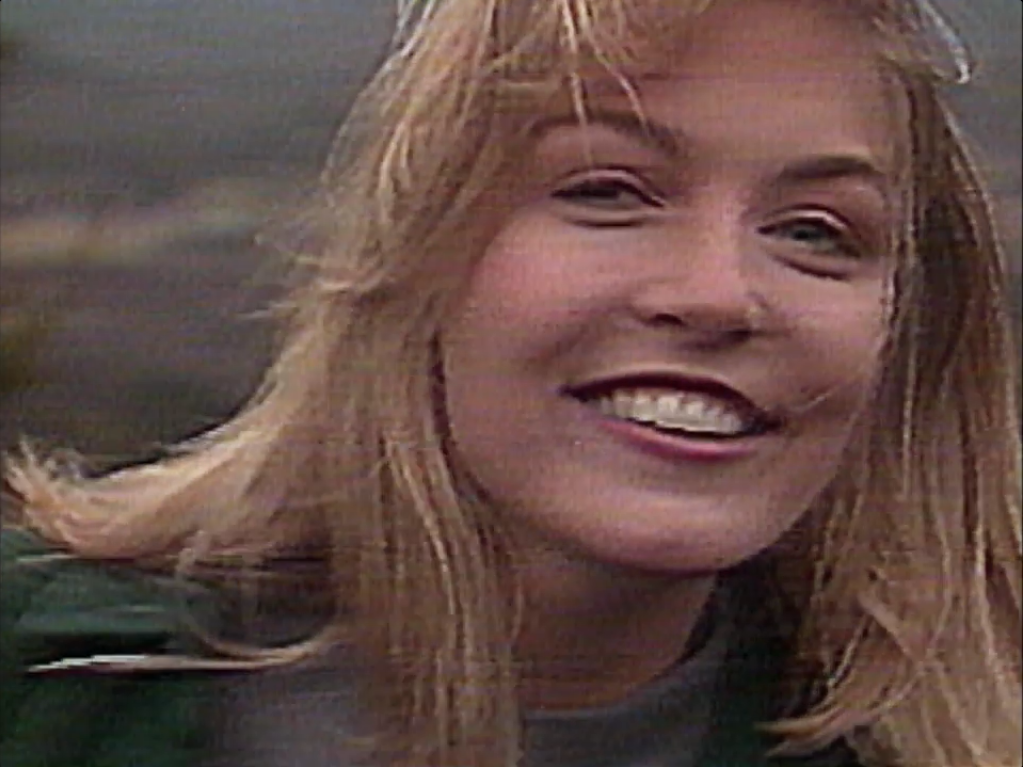 That’s Laura Palmer. Her dead body is found in the pilot, wrapped in plastic next to a big log, after the tide receded and left it — left her — on the muddy gravel bank. This still frame is from a home movie that Laura was in, one that the local sheriff’s department and the FBI examine, following the discovery of her body. Laura’s murder is the central plot theme of the entire series. It’s worth noting that even though Laura appears multiple times throughout the series in home movies, photographs, dream sequences, etc., she only appears as her living, breathing self in “Fire Walk With Me.” She’s pretty, isn’t she?

That’s Special Agent Dale Cooper of the FBI. He is investigating Laura’s murder. He’s quite eccentric, and his methods of investigation are anything but conventional. He loves a good cup of strong black coffee, and he does his best to maintain a cheerful disposition throughout the series, no matter how unpleasant the situation. And just in case you were wondering, I, the author of this blog, am heterosexual, but look at that guy and tell me he isn’t handsome. Go on, do it.

That’s Audrey Horne, teenage daughter of Benjamin Horne, a wealthy real estate developer in Twin Peaks and owner of the Great Northern Hotel, where Agent Cooper stays during his investigation. (TO BE CONTINUED…)