Alright, so I’ve been watching/re-watching “The X-Files” on Hulu off and on for the past few months.

“Watching/re-watching” because I think I had seen roughly half of the episodes already… maybe more like a third of them.

In case you don’t know, “The X-Files” consists of basically 2 types of episodes. One type of episode is “Monster Of The Week”. In these episodes, Mulder and Scully investigate some weird creature, or ghost, or alien, or whatever, and the story is resolved (more or less) in that self-contained episode. “Self-contained” because in the next episode, they would be going after some other monster, and the previous episode’s monster (or whatever) wouldn’t be mentioned.

Some of the more memorable “monsters of the week” came back from time to time, but most of them were one-offs.

That’s one type of X-Files episode. The other type are called “mytharc” episodes.

“Mytharc” is a term the show’s staff actually used (if Google is to be believed, “TRUST NO ONE” 🙂 ), and the word is a combination of “mythology” and “story arc.”

Which means, these episodes aren’t self-contained, they’re one long story. The X-Files mytharc was about the government covering up alien abductions, Mulder and Scully’s backstories, and so on.

As an aside, several years ago I got bored and decided to watch all the mytharc episodes up to I think season 5… because that’s all the seasons the local video rental place (since closed) had to rent.

I remember reading back then that many hardcore X-Files fans preferred “monster of the week” episodes. Regarding that, I can say with 100% certainty that if you only watch the mytharc episodes, you miss out on a lot (and I do mean a LOT) of what makes the X-Files a great show.

Actually my personal favorite X-Files episode – “Jose Chung’s From Outer Space”; the episode where Jesse Ventura and Alex Trebek make appearances as Men In Black – isn’t considered a mytharc episode, at least it wasn’t the last time I checked.

I am digressing like hell here, but if you’ve tried to get into The X-Files and couldn’t, watch that episode. Season 3, episode 20… it is (in my opinion) the quintessential X-Files episode. I didn’t really get the humor in the series until I saw that episode, and anyways it’s a good episode. 🙂

But getting back to the point, there are recurring characters in mytharc episodes, and one of them is the strong-jawed fellow you see in the picture. 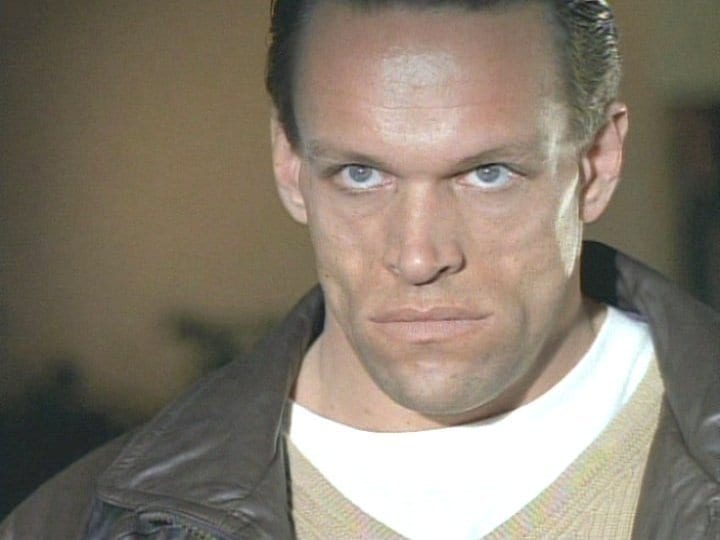 Well, it’s the same actor at least… there are several of these guys in the show. They are shape-shifting alien bounty hunters (the picture below is what they look like by default, I guess), and the only way to kill them is to stab (or shoot) them in the back of the neck. The dagger thing in the second pic is their weapon of choice, and they use it to kill various aliens disguised as humans, as well as probably a few humans, I honestly don’t remember. But anyways, when you stab (or shoot) one of these guys in the back of the neck, green stuff starts bubbling out, and they melt into a pile of green goop, basically.

Early in the series, when these guys (or other aliens like them) get killed, the green goop is accompanied by a toxic gas that kills humans.
But later…

I am currently watching Season 8 for the first time. And in episode 2, Scully kills one of these guys by shooting him in the back of the neck. In the scene, she is down on the floor after a struggle, and she fires a single shot that pierces his neck, he falls to the floor a few feet away from her, and he turns into a pile of green goop, as expected.

But… there’s no poison gas. And my question to any other X-Files fans who may be on my friends list is… where’s the poison gas?

I have looked online for an explanation of this, but all I can find regarding season 8 are general reviews that talk about how bad it is. “Doggett and pony show” and whatnot. But nobody explained why Scully didn’t even bother to hold her breath when the toxic green goop started bubbling out of the alien’s neck when she shot him.

Maybe I missed something in an earlier episode that explained that (I did fall asleep watching some episodes, and sometimes I was half-watching, half-doing other stuff)… or maybe it was just lazy screenwriting.